Rain had been forecast for the afternoon of our first walking day on what was, otherwise, a very promising weekend. One snatched at the last knockings, almost miraculously, from a summer of perpetual Atlantic fronts. To complete the three Munro summits that make up the Beinn a Ghlo range, before the rain set in, we were up and doing at the ungodly hour of 5.30am.

There is a special quality to the light and to the air just after sunrise. Photographs call it the blue hour. Walking into the hills, full of expectation, we feasted our eyes on the brilliance of the environment all around us. We were so lucky to be here, to be together and to be fit enough to even contemplate the 8 – 10 hour walk that constituted today’s challenge. 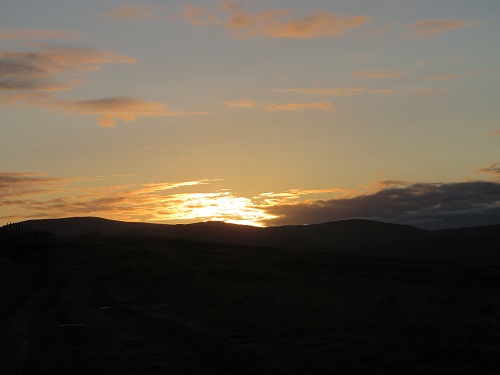 Munros don’t often do you the kindness of rising in gradual ascent to the top and the first climb today looked as if it was our steepest yet. Then we had to descend and re-ascend another couple of times before reaching the highest point of the day which, standing at 1129 metres, only has 30 Munros that are higher. Following this there was the mere 2 hours of walking as we completed the circuit and got back to my van. But, all that is getting way ahead of myself. 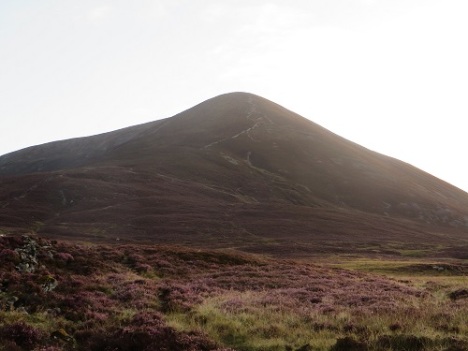 Misfortune set in way before we ever got to the first climb. Weaving our way around the boggy mass, that had greeted us as soon as we left the approach track, I unusually misread the solidity of the earth beneath my paws. Suddenly, alarmingly, my shoulders were parallel with the ground on either side of me. This meant I was sinking fast in a squelching mass of liquid peat. Panic set in as I tried to execute a desperate exit strategy, that had as much success as the as the ratification of the Maastricht Treaty. Front legs, leaping for safety, might have done the trick if my rear end wasn’t held back by the weight of muck that engulfed it and was continuing to suck me down. Getting free was like trying to escape from the farewell embrace of an octopus. After half an hour of frantic gyrations I managed to crawl, in a heap, onto a bank of heather. Well OK, it might only have been a couple of moments but, in moments of crisis, time passes in slow motion and it felt a whole lot longer. Despite my sorry state, carrying a coat several centimetres thicker than the one I started out with, B’s response was hysterics which I found rather cruel. I was in no state to see the funny side of anything. So, I went v. v. v close, looking utterly dejected and then… I did a big, big shaking thing, right next to her. Now we both had additional clothing and it smelt rancid.

After this we reached that steep ascending path and I kept running a long way ahead, making a bit of a point. Even for B, steep paths – despite their muscle wrenching properties – get you to the top quickly. Therefore, my photo shot on Carn Liath was at a time of day I don’t usually associate with consciousness.

From here it was a glorious broad ridge that stretched out ahead of us. The Idyllic light, caught in the early morning, wasn’t the only benefit of getting up at the crack of dawn. Being ahead of the Munrosa meant unpopulated hills and this equalled freedom for Ben. Without the distraction of irresistible ankles I could be leadless, roaming free across the vast playground of the mountains. I felt as the Keats had.

“ I stood tiptoe upon a little hill,

… I gazed a while, and felt as light and free

As though the fanning wings of Mercury

Had played upon my heels: I was light hearted

And many pleasures to my vision started…”

Looking ahead, I thought it was about time someone built a bridge that spanned that little bit of air between the edge of where I was now – as I pawsed for thought – and where I wanted to be next. In the absence of such a convenience me and B followed the path down and sinuously wove our way – with much huffing and puffing – up to Braigh Coire Chruinn-bhalgain, which means Height of the Corrie of Round Blisters. At this time, with my 42nd Munro in the bag, the pads on my paws were like leather so I couldn’t complaint about blisters but, I did wish I could shake off that smell of bog. 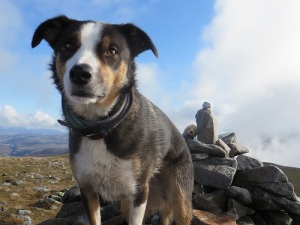 As the August sun continued to give notice of it’s intention the early morning mist rose to greet the occasion, and bands of wafting cloud engaged in a tango wrapping around – and extinguishing – the blaze of light, in a dance which concluded when the majestic Carn na Gabhar emerged, as if from inside its own eminence.

Once again, in the absence of a convenient Thomas Telford construction, we had to follow the path down to the col and up to our final summit. Smug satisfaction was our guest, on arrival and we gave due timing to our last Munro ritual for the day. 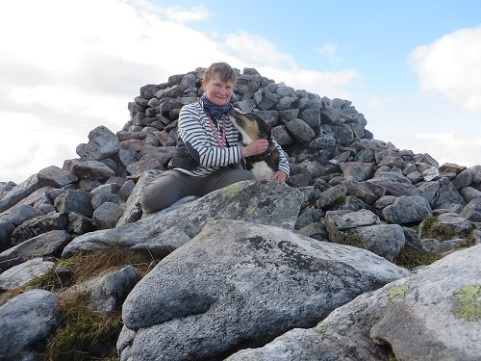 Pride comes before a fall, as another one of those totally incomprehensible human sayings go. Immediately we started the descent B’s Knees (see it’s not only Keats who can pen a pleasing little rhyme) objected to the gradient and so began a very painful journey down hill. Though I was truly tempted to have a laugh, getting my own back for the curious incident earlier, of the dog in a bog (you can’t stop me once I get going), I didn’t. I’m an empathetic little buddy so I kept close, praying with all my paws that we would make it back by my dinner time. It was a long, hobbly trek along Glen Tilt but eventually my van was in sight.

The completion of three Munros would normally be a cause for celebration but the edge was taken off today’s achievement by the presence of pain, and concern for the hills yet to walk this weekend; to say nothing of the 239 still to go. Silence ensued and I knew it best to keep my head down. After all, we say it best, when we say nothing at all. On the way to our overnight spot zzzs overcame me and I gave way to them, floating deliciously off to sleep.