Sadly, we had been followed by the Massif of Munrosa we had left previously left behind, so I told them what I thought of them again. However, they were more dispersed up here and my telling off was a bit more muted. It disappeared completely when a Munrosa took out a long skewer, packed with chicken; now that is my sort of long stick. I put on my very best gooey eyed, lovely expression, staring at her with a big PLEASE hanging in the void between our eye contact. It worked wonders and it was no measly bit of scrawny chicken that came my way either, it was a great hunk of of premium quality fleshy breast, followed by another and another and another – pure unadulterated Munro heaven. There was a little pause for digestive purposes and then then same Munrosa produced another bag of delights, so I had my very first taste of spicy sweet potato – very delicious, I highly recommend it.

After all that, what I really needed was to find a soft bit of mountain and settle down for 40 winks but, not a bit of it. We set off again for more downs and ups with lots of wide sweeping, sniffing and cocking. B pointed out Schiehallion to the North East, it’s majestic presence amplified by broad shoulders that stretched out for miles, communicating a benign dominance in the landscape around. 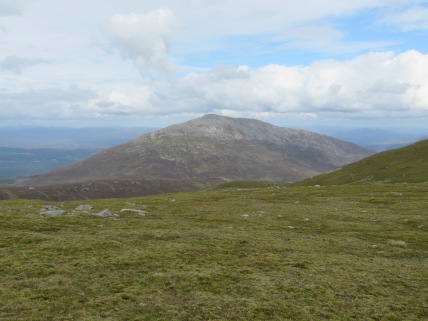 Schiehallion was on our agenda for Monday, but that was getting a bit ahead of ourselves. In the meantime, the next Munro rite had to be attended to at the top of Carn Mairg and, for me, it was becoming a bit of a bore by this third time around; I really couldn’t be bothered. I tried to give a different portrait but I hadn’t really changed much in the last hour, or so.

Still, proof was proof and it had to be provided though, as time was pressing on, we didn’t linger for long. We had to take a bit more care on the way off Carn Mairg, because it was the only rocky bit on the whole circuit. We managed fine, even with me on my long lead so as not to upset the landed gentry, and arrived at the next Col, in not time. I used to think this was abbreviation and would get quite upset when there wasn’t a party of collies at the bottom to play with. Now though, I know it means the lowest point between two peaks. Therefore, there is only one way to go when you get there and yup, you guessed right, we were on our way up again. I think we both started to feel a bit euphoric at this point, knowing we were going to make it: four wonderful Munros in the bag, in just one day. If I said we sailed up to the final summit I would be lying but there definitely was a slight spring in our step and with four paws steps and two boots steps that makes for quite a bounce. Then we were there, at the top of Meall nan Aighean, and I didn’t even complain about the sharp stones that make up that particular summit cairn. 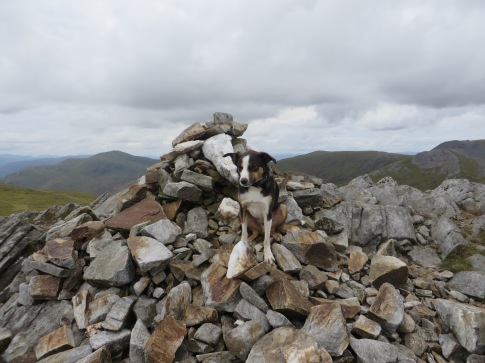 We still had a long way to go of course, right back to the beginning, but we had done a big arch and now it was truly just down, down, down,

though I had forgotten about having to negotiate all those fallen trees again. B was not at all pleased, because we she could see that a short estate track let down to the valley road, but this has been locked forcing us to go stumbling over the trees again. B said she thought if we fell over and hurt ourselves we could take the estate to court for a failure in their duty of care. Sadly, I’m a dog, not a lawyer, so I really couldn’t offer advice on that. I took us about another twenty minutes to come out at the road but we were all in one piece so, alls well that ends well, as the bard says. And, I was right. We had just topped eight hours on this, our first very long day out.

Altogether we climbed 1340 metres, that’s 4422 feet in old language and an awful lot for a two year old, just four metres short of going up the biggest mountain in the whole of the United Kingdom. Didn’t I do well?

What do you think I did when I got back to my van?